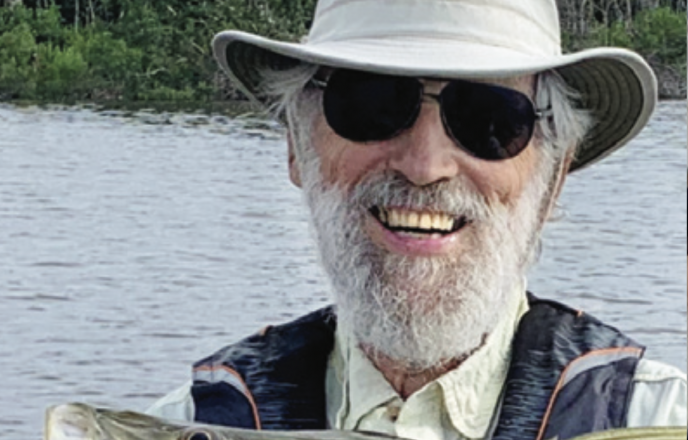 While shopping for Valentine’s Day cards, Headwind and I espied a man in fishing togs, crouched in front of the bottom shelf at the far end of the aisle. The store wagon beside him was brim full.

“Uh-oh. That looks like Justin Casey,” I murmured as we trod in that direction.

“Uh-oh. It’s him, all right,” Headwind said as we trod closer.

If Justin Casey gets to a fishing or boating supply store before you, or even a greeting card store, they’re probably out of whatever you’re after.

He has two or three of everything, except for stuff he can afford four or five of, just in case anything breaks or falls overboard.

We guessed he already had all the fishing-themed Valentine cards in his wagon, so we would have left the store but he espied us and beckoned with evident urgency.

He was still crouching when we hove alongside.

“Patella says if you swing by his house on your way home, he’ll give you a jug of knee oil. He buys it by the case, as you advised,”

Headwind said. “Why were you crouching so long?”

Justin explained that the bottom shelf where he was is where the best cards are most likely to be. He looks there for the same reason he fishes where he thinks the most and best fish are.

“In these digital times, regular printed cards sold in stores are bought mostly by older people,” he told us. “A lot of us can’t bend over much without straining our backs, or crouch to the lowest shelf without hurting our knees, so most of us don’t look low.

“That’s why the upper shelves here are nearly empty and the lower shelves look unexplored. Some fishing-themed cards are down there, but not many.

“I have to buy cards with pictures of water and then find boat and fish stickers to put on them. If there’s enough space, I add a few lines of romantic verse.”

Before we could stop him, Justin began to recite: a fish out of water caught by a slimy worm.

“That’s the first verse of ‘Oh Fisherman,’ by Melissa Wadkins Patterson,” he told us. “The rest of it isn’t that romantic.”

I asked Justin if he can predict the weather by how bad his knees hurt. Lots of senior fishing-doers claim they can do it with their finger joints.

“I can’t but Patella can,” Justin said. “When it’s about to get real cold, his knees begin to hurt. It’s too bad he was out of town when that cold snap struck in the middle of January. Remember that? We had to rely on science to know it was coming.”

Of course we remembered. Empirical reports given at the Fish or Cut Bait Society told of tarpon and snook afloat in the marina at Flamingo and of butterfly peacock and Mayan cichlids belly-up in scattered spots of fresh water. Where fish had access to deep water, survival rates were high.

Fish don’t watch television or own cell phones with weather apps, but somehow they know when it’s about to get that cold. The ones in shallow water scoot for deeper, warmer parts.

They who hesitate are lost. The smart ones make it snappy.

Leaving the store, Headwind and I followed Justin to visit Patella. That one’s pretty good at predicting weather. He has almost all of us believing that his knees tell him when it’s going to be too cold to fish, which way and how hard the wind is going to blow next weekend and stuff like that.

When he’s wrong (usually about the wind), nobody blames Patella as angrily as they would if they knew he is a meteorologist at the National Weather Service, a federal government agency.

A lot of the sportsmen in the Fish or Cut Bait Society don’t trust the government. When its weather forecast is wrong they think that’s a conspiracy, not a mistake. Patella says no, forecasters aren’t that clever.

“We insiders like to call it the National Whether Service, with two haitches,” Patella likes to tell the small clique who know his secret identity. “Because we don’t know whether it’s going to rain or it isn’t. Ha ha, that’s a joke.”

He led us to the garage, took a quart of knee oil from under his workbench and handed it to Justin Casey.

“Rub this into your knees, front and back, twice a day,” he instructed. “It’s good for elbows too, but do not substitute it for engine oil or drink it when you have indigestion.

“You also should not dip baits into it. Use the oil in a sardine can instead.”

Justin, who knows how to return a favor, led Patella to his pickup where he opened a briefcase. He took out a Valentine card which he signed, “Affectionately, Justin Casey.” He presented it to Patella and gave him a manly hug.

Patella opened the card, read it and wept. So may you:

Your Catfish Friend
If I were to live my life
in catfish forms
in scaffolds of skin and whiskers
at the bottom of a pond
and you were to come by one evening
when the moon was shining down into my dark home and stand there at the edge of my affection
and think, “It's beautiful
here by this pond. I wish somebody loved me,”
I'd love you and be your catfish friend and drive such lonely thoughts from your mind
and suddenly you would be at peace,
and ask yourself, "I wonder if there are any catfish
in this pond? It seems like a perfect place for them."

Justin told us the poem was written by Richard Brautigan, a 1960s-‘70s hippie and fishing-doer who also wrote the novella “Trout Fishing in America,” which sold 2 million copies.

The poor man lasted only 49 years due to suicide but Justin felt he was bringing him back to life. Isn’t that touching?

Before leaving, we all asked Patella if there was going to be another extra-cold front that might kill more fish. He said of course there was. He had us roll up the legs of our long pants (the weather was still cool) and demonstrated with all our knobbly knees and marking pens, tracing recesses and mounds that he said represent atmospheric pressure ridges and troughs.

Patella told us there would be another cold front the very next week, and he was right. He fudged about the rest of winter, but said we should be surprised if it didn’t happen again.

“In days of old, as you’ve been told, South Floridians could count on getting pretty harsh cold fronts all through February,” he taught. “A year or three ago, we got one fairly well into March.

“My knees don’t act up much in March, so for that time we must rely uneasily on science. Terrifying, I know, but we have no other choice. Have a happy Valentine’s Day.”